Almost all of the new releases of the Galaxy Note presents a big attractive display along with supreme performance and the stylus (S pen). These things might be getting a little predictive but here we are going to shed light on 5 best and worst things about Samsung’s latest Note model.

The Good Things about these models

The mobile displays have always been the best ones when it comes to Samsung devices. The S10 Galaxy and 10+ Galaxy had amazing screens but the Note10 is immensely same as well. The smaller one is just 1080p compared to S10 but both the devices carry OLED and HDR10+ displays. The rich colors and supremely attractive displays screen it look very pleasing to the eye.

This device is coming in Snapdragon 855 and 8/12GB of RAM as well. The Note 10 and 10+ is able to do anything you can hope for a smartphone to do for you. You cannot call this phone a slower one but still it is not as fast as the OnePlus 7 pro. In additional features, the new Samsung phones let you use Dex along with Mac and Windows. Making it a very clean trick in a smartphone to have.

The in-box chargers are 25-watt in these phones. The speed is so brilliantly fast that it can go from zero to 100 in just one hour. And this feature is available in Note10+ which comes with a sizeable 4300 milliamp-hour cell.

With an additional charger, the Note 10+ is capable of charging at an absolutely nonsensical 45 watts. That is precisely a laptop-level charging.

With great power comes great responsibility and it is very natural to expect that the battery cells of Note 10 and 10+ might get exhausted quickly. But it is not the case here, Note10’s battery life is an average life compared to other phones but the battery life of Note10+ is great. You can reach to almost 7 hours of screen time in a single charge.

Note models look empty without S-Pens. The new model comes with a stuff that is blatantly gimmick but as a whole, the new Note10’s S-pen is better compared to other previous releases. The navigation is made easy through this S-pen and you can also use it for other functions such as taking notes. And if you get addicted to the use of such an S-pen then you would feel life is very hard without it.

After discussing 5 good points, now we are going to shed light on some of the discrepancies of these Samsung models. 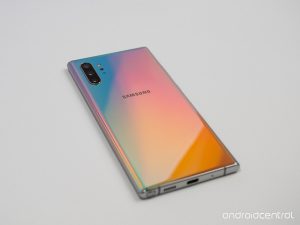 The Bad Things about these models

The prices of the Note series have already been on the higher side and Samsung has made sure they continue that trend. The fact of the matter is that Note10 starts at $950. If we compare it to other phones of Samsung than Galaxy S10- is literally $100 cheaper.

The Android version updates might give you a bit of a headache if you are going to use this phone. Samsung’s record in the updates matter is not great.

The last Android 9 pie first came to Google phones in August last year but the unlocked Note9 couldn’t see the update until March. According to this strategy, the Samsung Note10 might not get the Android 10 until next year which is of course not ideal.

No Headphones in this model

Samsung’s phones have been very exquisite in providing almost every function to its customers. The previous S series like the S10 had a 3.5 millimeter headphone jack. However, it’s quite intriguing to see there are no earphone jacks in these models. They do come with USE-C earbuds but the old school boys would surely miss the old stuff which is missing in this model.

Samsung comes with an in-display finger-print scanners which are always ultrasonic. In order to authorize the access to the device, they are made in such a way that they bounce inaudible sound waves through your fingers and reflect the echoes to govern whether or not a digit is authorized to gain access.

This feature might sound cool to you but is still not as good as the optical solution in the phones like OnePlus. Also the prices of these models in Samsung are not doing justice to these kind of ‘good enough’ features.

Disparity in features between the two phones:

The new small model of the Galaxy Note10 can be termed as an interesting option for people who want to mockup the S-pen life without stuffing a surfboard.

But choosing non-plus Note, you might be giving up on a lot of other important and exciting features. Such as a large display of a 1080p screen whereas the larger 10+ sports are coming in 1440 panel. The RAM is 8 gigs instead of 12 and 256 GB of storage that too without the larger 512 gig option or a micro SD slot. There’s no feature for flight sensor or enhance depth detection in photography. There’s no 45-watt charging compatibility as well. It is still considered a great phone but these prices are not justified.