A performance driven laptop that does not care about its cosmetic looks. A few gamers like this type of hardcore designing concept, but other won’t get attractive to it based on its looks. It does not use any extra material to hide its fatness and heavy feel. The only thing Acer Predator Helios 700(Official Website) cares about is its performance. It is a machine which performs exactly how a 9th Generation Core i9-9980HK CPU and Nvidia GeForce RTX 2080 should impress its users. You can play games like PubG, Fortnite and more for hours with worry about any performance degradation. 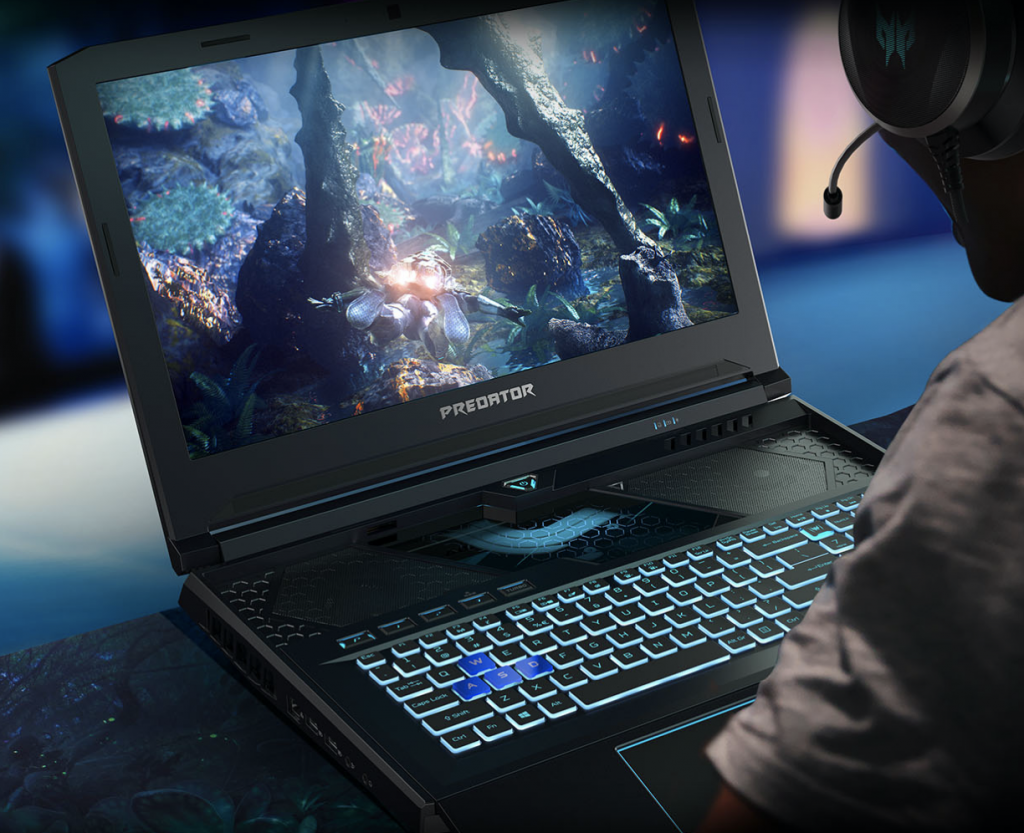 Available Upgrades: Two open SO-DIMM slows and two M.2 slots are available in back cover of this laptop is opened. These slots are covered with only a cooper heat sink. There are a total of 4 RAM slows inside this laptop, that is why there are two RAM slots are empty. 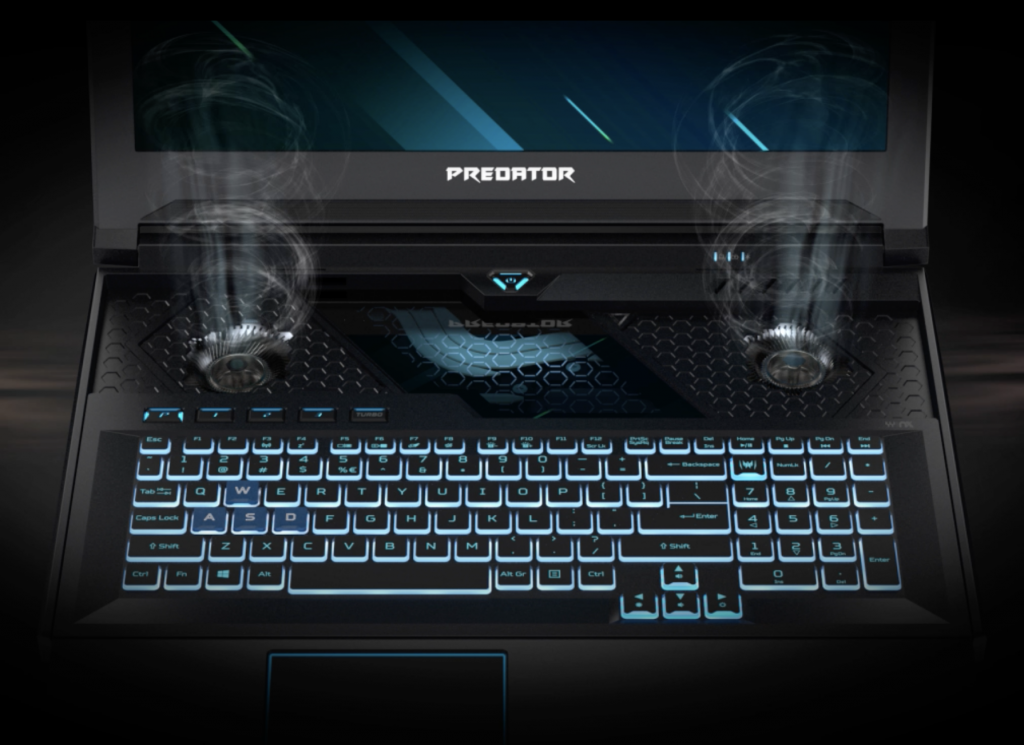 An important thing to notice in this performance focused gaming laptop is its sliding HyperDrift keyboard.This keyboard forms a palm comfortable deck by sliding forward. You will hear Transformer style sound when the keyboard is being slide forward followed by a message saying auto-overclocking has now been engaged. This over-clocking on sliding the keyboard also enhances performance of this machine. Acer, manufacturer of this laptop, claims that this keyboard move also improve ventilation of hotter components directly.

Acer Predator Helios 700 gaming laptop allows you to swap out WASD keys for linear switches. This will help in in tuning pressure curves and actuation points. The MagForce linear switches allow you to have up to 256 different pressure levels for racing or FPS and racing game settings. It is a useful features for most of the games but not all the games available these days recognise them.

A small case to store the special MagForce keys and a handy tool to change them is also provided in-box with the laptop. This switching procedure might just take a minute and then switch back when you don’t need them. Please note that you need to update your laptop about your key change through the given application, otherwise it won’t work.

All the performance tests were performed with open and closed keyboard positions, separately.

We should now look into the performance of Acer Predator Helios 700. First of all lets check the results when Maxon’s Cinebench R15 was run on this laptop. Intel says that a 13-Inch 2.5 pound laptop is less likely to be used for doing 3D modelling. Bigger screen laptops are more likely to be used for this type of task.

Cinebench R15’s result on this laptop using all the cores and threads are very impressive. Alienware Area 51m R1 is the only laptop that is faster than Helios 700. It easily rise above all the other laptops using its 8-core mobile chips and a sole AMD entrant, the Acer Predator Helios 500. 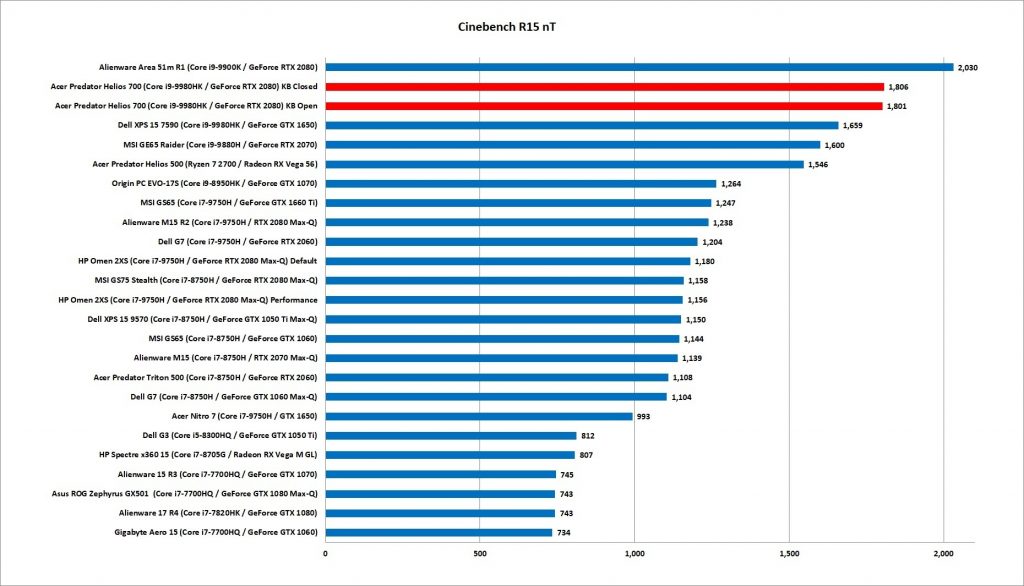 In general we all want to test our laptops up to the max performance which uses all the cores, but in reality there are a lot of softwares that are single threaded. These are used for tasks such as in some browser, Office and Adobe Photoshop. To find out how well Acer Predator Helios 700 performs tasks with lighter load, Cinebench R15 was used to test the single thread. In result it was seen that it was a bit faster as compared to its competitor Alienware Area 51m R1. 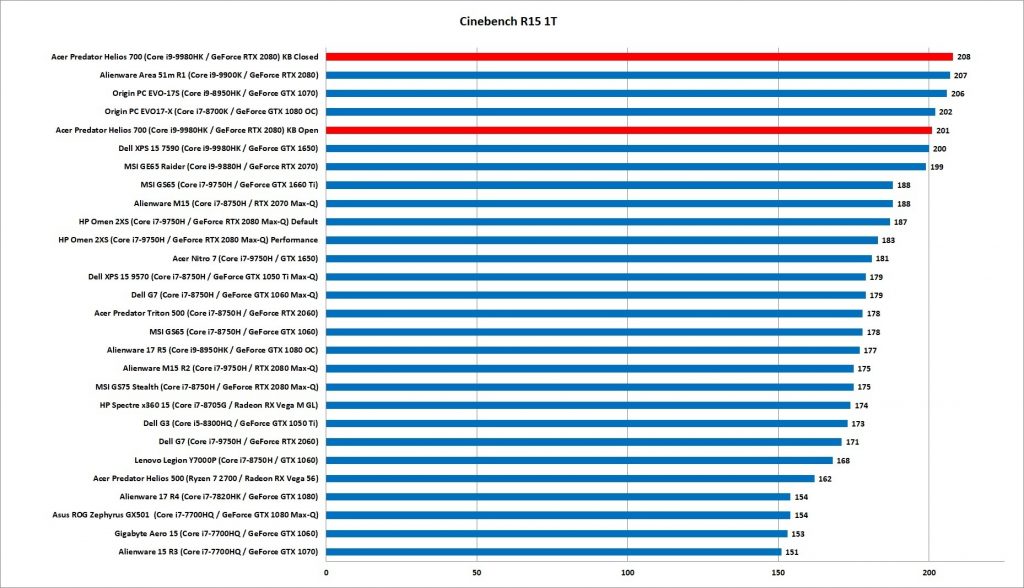 These above shared results are based on the tests which for some laptops are less than minute of performance. So, to test the performance of these laptops on long running tasks, free Handbrake encoder is used. This test can take up to 45 minutes on quadcore laptops, up to 30 minutes on Hexacore laptops and another 8 minutes less on Acer Predator Helios 700.

Again, the only laptop that beats our under-review laptop is the same Alienware. Without any doubt, performance of Acer Predator Helios 700 is still really impressive.

Acer Predator Helios 700 is a laptop especially for gamers, so let’s just look into its performance in this area. The first we are going to share here is the 3DMark Fire Strike test. In this test impact of Laptop’s CPU on graphics performance will be reduced, and graphics sub-score will be our main focus.

Yet again, Alienware Area 51m R1 is at the top, followed by Acer Predator Helios 700 (KB Open) and then KB Closed after it. Now, the impact of Slide opening of keyboard is clearly visible with 6% of increase in performance. 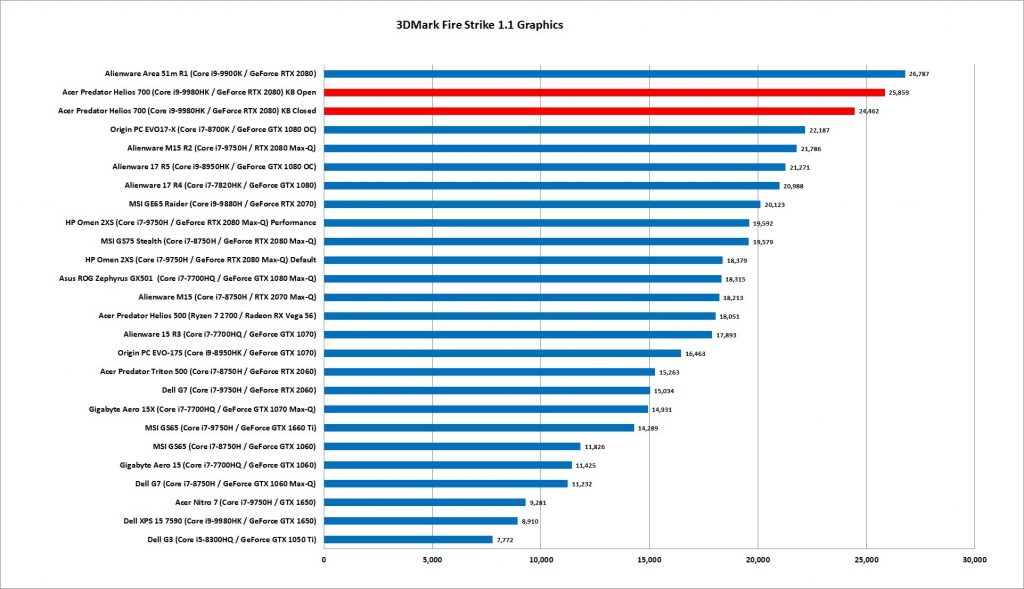 3DMark Fire Strike is DirectX 11 and a bit old test which does not stress the hardware much. So, here is DirectX 12, 3D Mark Time Spy test which increases the load of graphics as well. With default settings and KB Close, Acer Predator Helios 700 came on the third position after Alienware’s gaming machine. But with the KB Open and default overclocked activated, Helios 700 took the first position with 9% on performance improvement as compared to KB Close results. 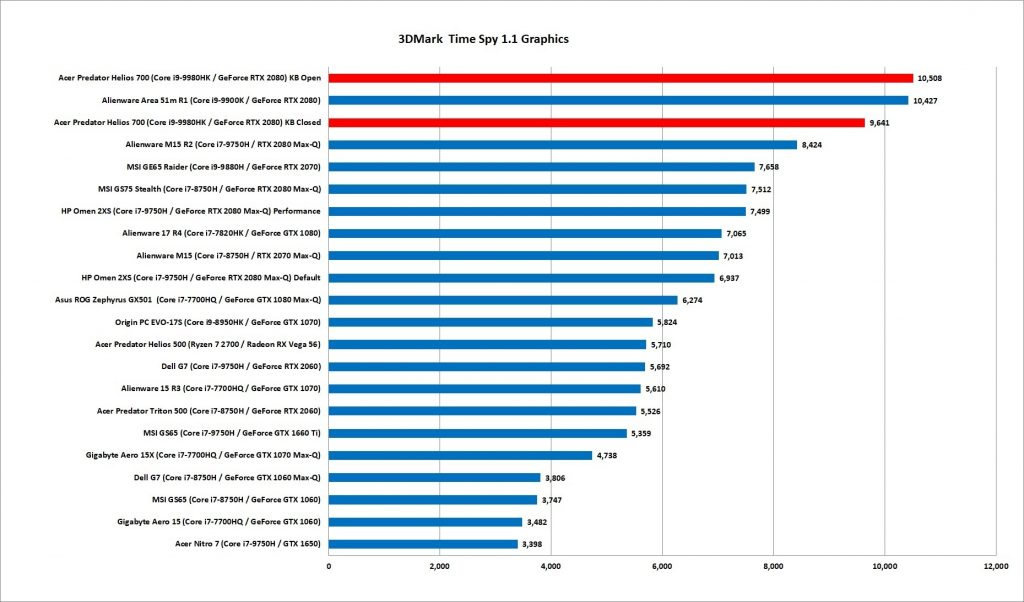 Now, the next test we are going to share is 3DMark Port Royal which checks the performance of ray tracing. Yet again, Acer Predator Helios 700 took the top position with KB Open and per-set overclocked active, similarly performance with KB Close came at the third after it competitor. Here KB Open increased the performance of this gaming laptop by 7% overall. 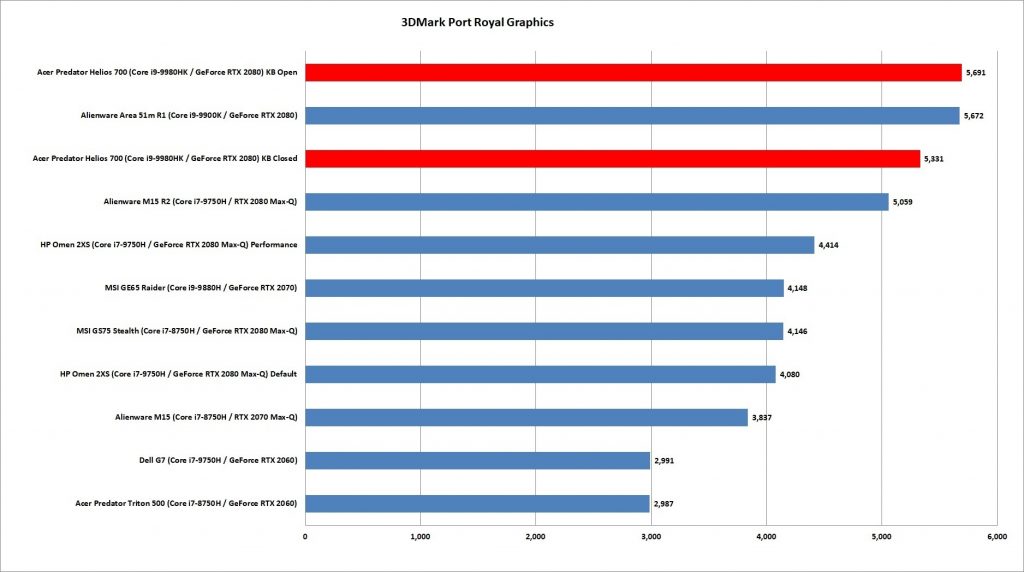 Let’s check the test results with a few other games including Rise Of Tomb Raider at Very High. Here the top two positions got switched. Check the results below: 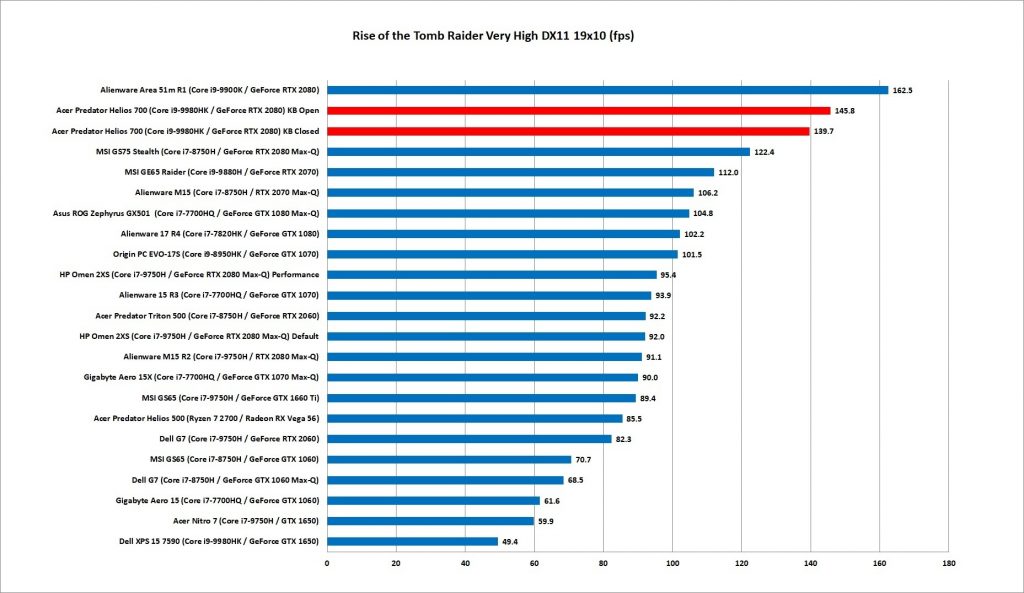 But, in Middleearth: Shadow of the Mordor at Ultra, Helios 700 was again at top with KB Open and at third with KB Closed. 2nd position in this test yet again goes to the same competitor by Alienware. Check the results below: Acer Predator Helios 700 has satisfactory level of performance when it comes to the battery life. Battery performance losses its ground when we are talking about a heavier laptop. All the gaming laptops suffer in this area because your power consumption rises considerably once you boost the performance of GPU and CPU. The best someone might get in this area is a usage of an hour or two on one charge.

Helios 700 can run a little above 2 hours with a light load, whereas this time will go down to under an hour if CPU and GPU of the laptop are pushed to the limits. Still, this is acceptable because of G-Sync and heavy operational capabilities. How to Wall Mount a Monitor without Holes – Top 3 Solutions