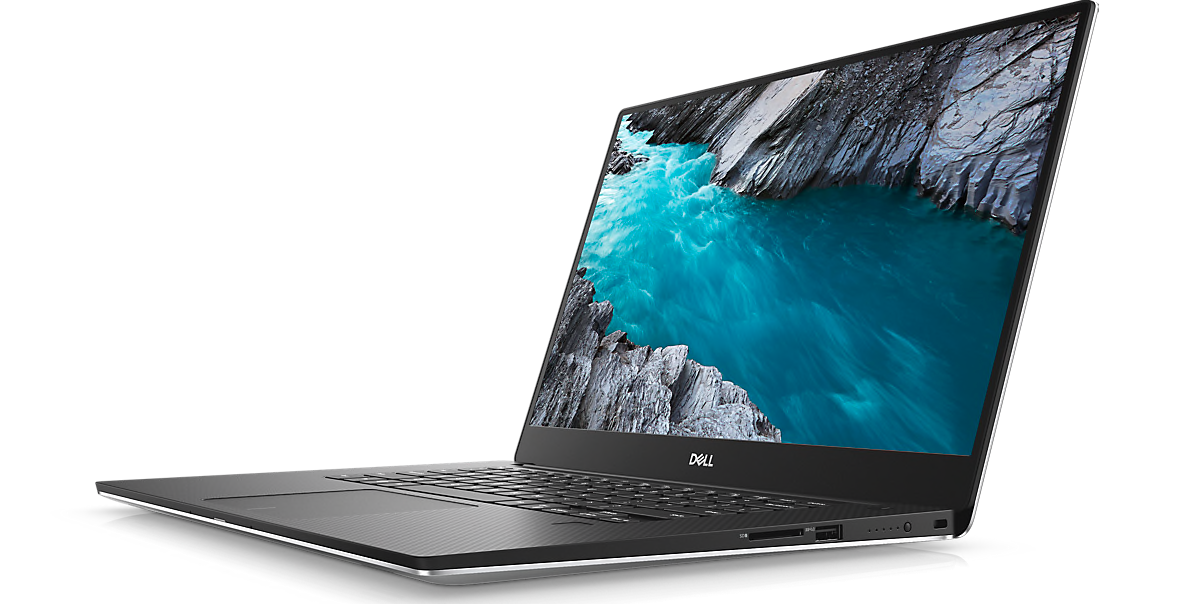 Dell’s XPS 15 version 7590 has much hardware stuffed into a 4.2-pound laptop. This latest version includes up to an 8-core overclockable Core i9-9980HK and a discrete GeForce GTX 1650 card. This is a lot of hardware in a body that’s not built to handle it. You can expect this kind of hardware in a gaming laptop, not a high-end, thin-and-light workhorse.

Dell tried to compete with the MacBook Pro 15 which is another high-end 15-inch laptop that’s stuffed with hardware. It’s not a gaming machine either. Both these systems are designed for programmers, engineers, content creators, and other computing-intensive professionals. Most consumers compare the top CPUs on both laptops and buy the one with the faster CPU and that is a harsh reality.

If Apple can cross the line with a Core i9, Dell is apparently ready to cross it too without holding any thermal limitations. Our review will see if the XPS 15’s stretch was worth the sacrifice.

But is the XPS 15 worth that stretching? The answer to that lies in the review of the new Dell laptop.

The outside is the same as before, with a carbon fiber keyboard deck, aluminum top, and aluminum bottom. There is no difference between old and new except for the relocation of the webcam from the bottom to the top of the screen. 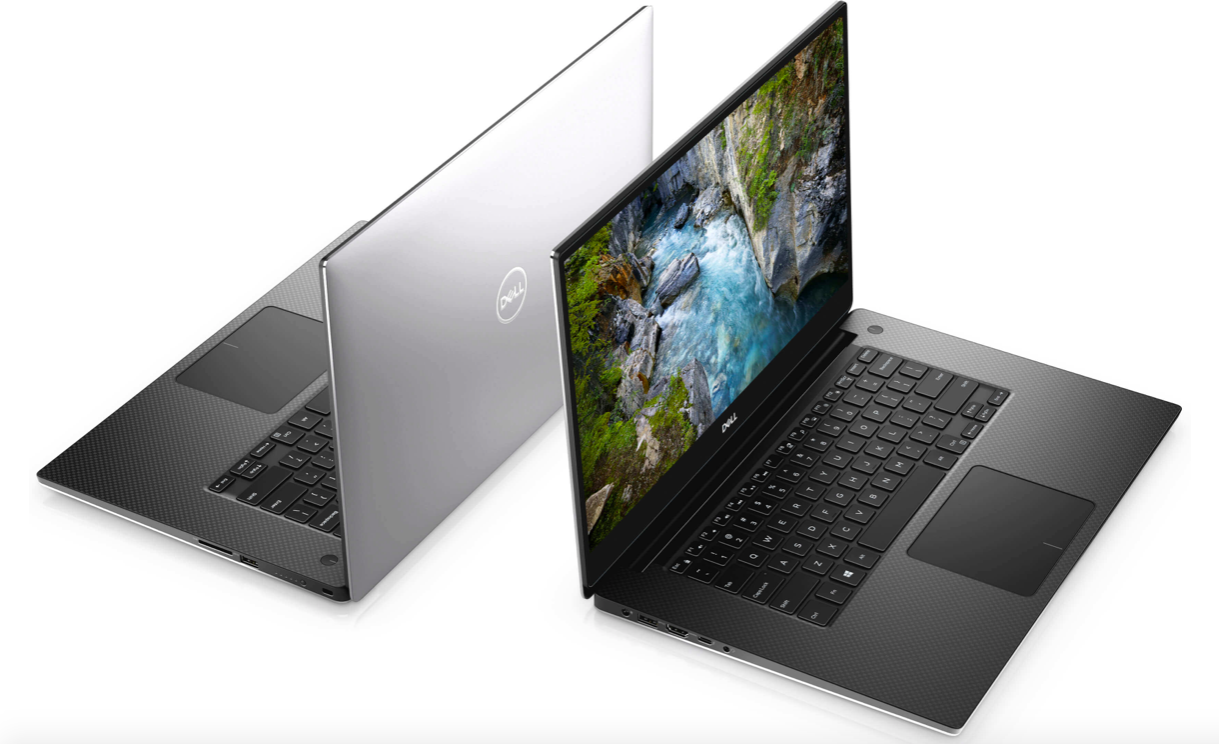 The previous XPS 15 9570 featured an 8th-gen 6-core Core i7, with an optional 6-core Core i9. On the other hand, the newest XPS 15 offers Intel’s newest 9th-gen 8-core Core i9 and not just any 8-core CPU either, but the overclockable Core i9-9980HK. So, the biggest change is the processor.

The XPS 15 lineup continues to be upgrade-friendly. To get inside, you’ll need to remove the perimeter Torx screws and two Phillips-head screws in the center. You can then gently remove the bottom panel and access two DIMM slots, an M.2, the battery, and a wireless module. 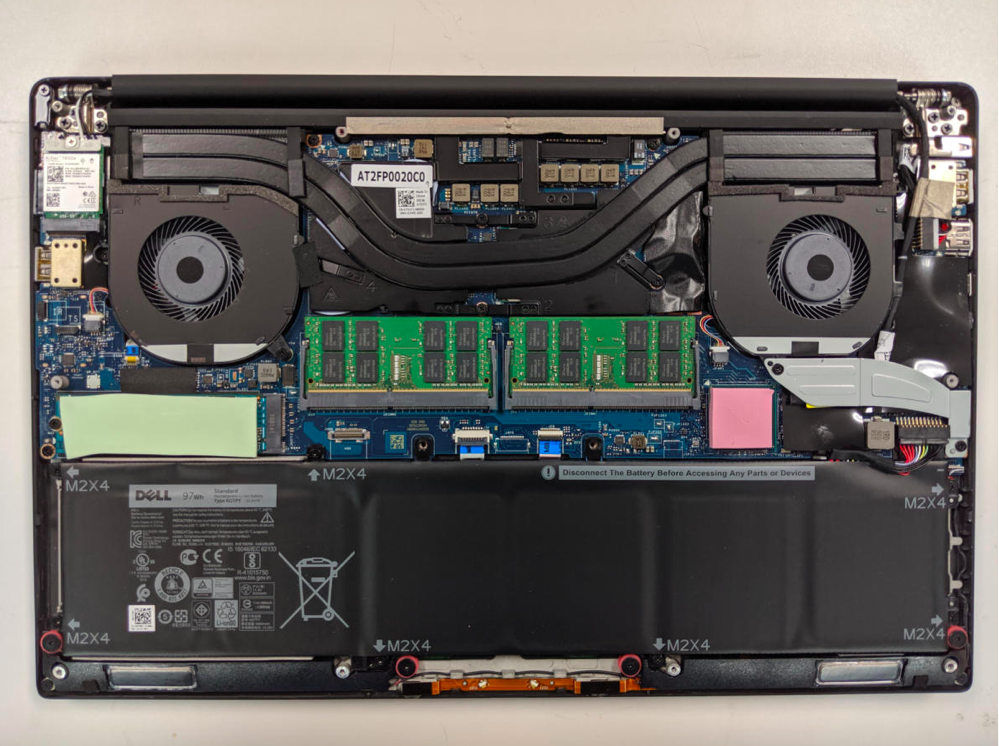 Cinebench R15 is our first vulnerable benchmark. This is a 3D modeling test built on an engine sold by Maxon in its Cinema4D product. It is nearly a pure CPU test and, like most visualization applications, it loves CPU cores and threads.

The performance of the XPS 15 7590 in the multithreaded version is simply outstanding. Including three 9th-gen 8-core CPUs, plus two desktop 8-core CPUs (one Intel, one AMD).

The Dell XPS 15 7590 has enough ponies to outrun the thicker and heavier MSI GE65 Raider as well as the AMD Ryzen 2700-based laptop. It’s outpaced only by the much heavier Acer Predator Helios 700, and the beast Alienware Area 51m R1. 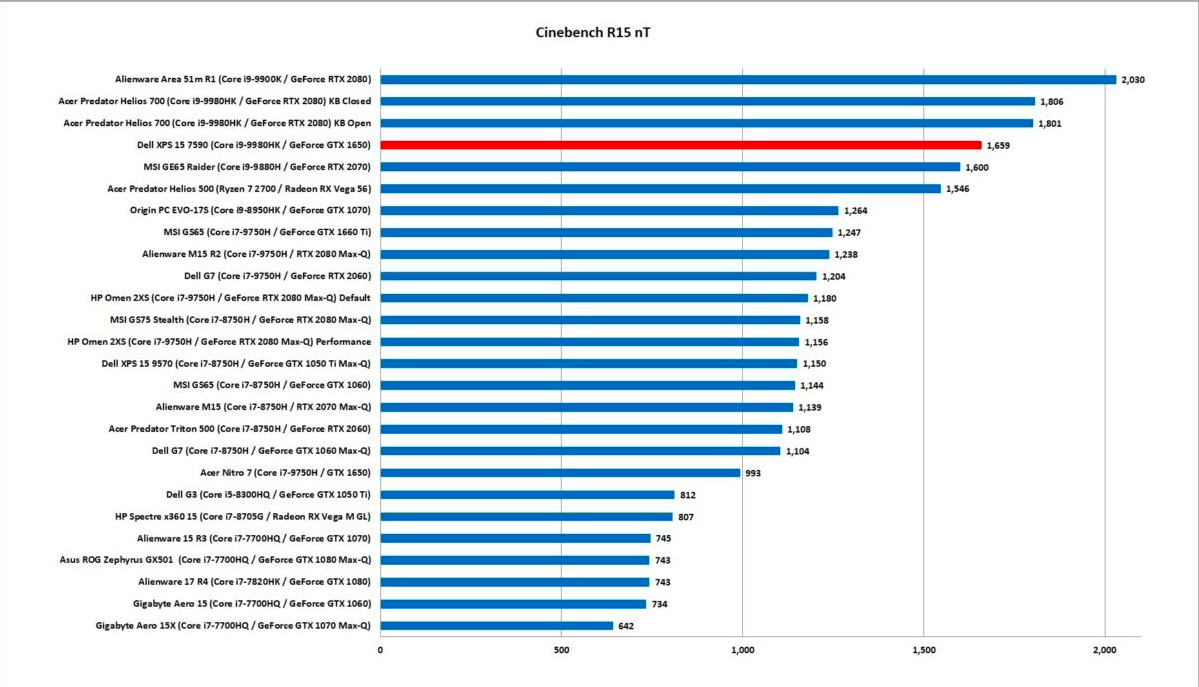 Cinebench isn’t representative of all multi-threaded cores but it’s a pretty good stand-in to gauge performance in applications where Cinema4D is embedded like Premiere Creative Cloud. If you have an older laptop, the uptick can be significant. 45 % compared to the 6-core XPS 15 9570, and an amazing 123 % faster than a 7th-gen Kaby Lake laptop.

If your usage is only Office and browse online, while you really only care about single-threaded performance then you probably don’t need an 8-core laptop. Again, 3D modeling is not representative of all application performance, it gives an idea of how the XPS 15 will respond under a fixed single-threaded load.

The 9th-gen Core i9 laptops lead the pack in performance. Nevertheless, the 9th-gen and 8th-gen Core i7 laptops also follow close behind. It would seem difficult to tell the difference between a Core i9 or Core i7 in the vast majority of single-threaded tasks such as Office, Chrome or even most Adobe Photoshop routines, even if they are a little faster. 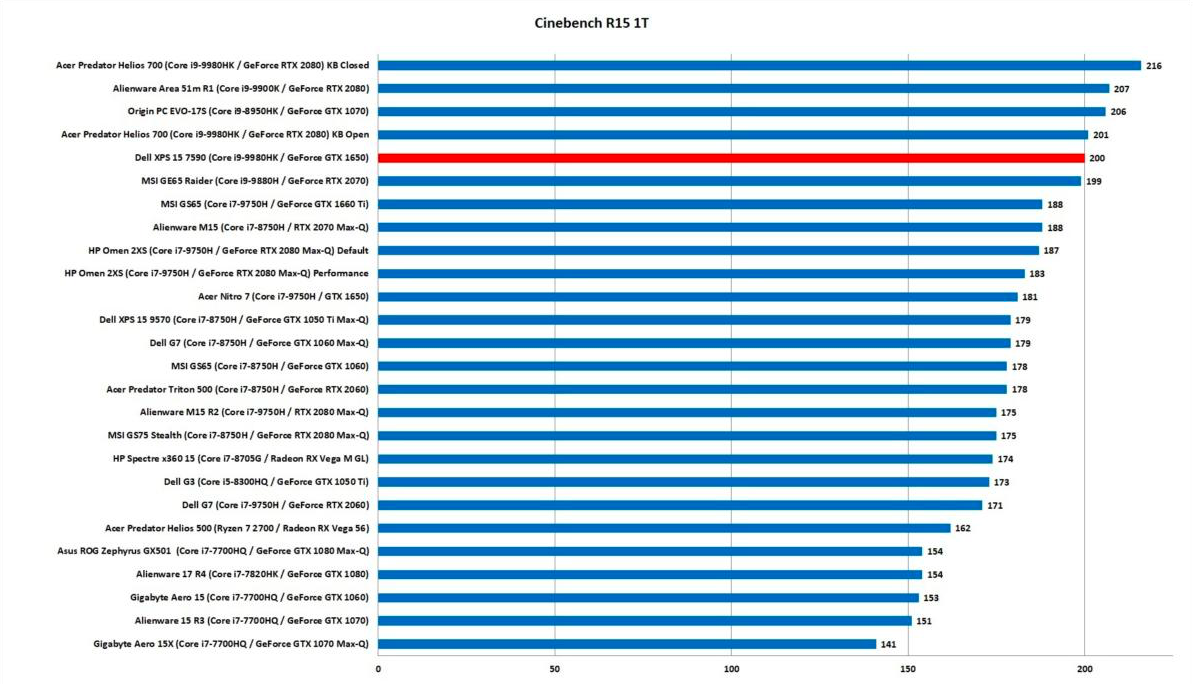 One issue with the benchmarks above is they run too quickly (within a few minutes) to heat up the CPU much. That’s why people use the free HandBrake utility to encode a 30GB file using the H.264 encoder. Even on the 8-core CPU laptops, the task typically takes in excess of 25 minutes to finish. That warms up the CPU and should reveal any limitations in the cooling or power delivery of a laptop.

The thicker, heavier MSI GE65 can keep its CPU cooler and provide it with power better than the lighter XPS 15 can. In fact, the MSI GE65 beats the XPS 15 even though it uses one step down in CPU models.

The thermal limits on the XPS 15 7590 put it uncomfortably close to the HP Omen 2XS when it is set to performance mode. 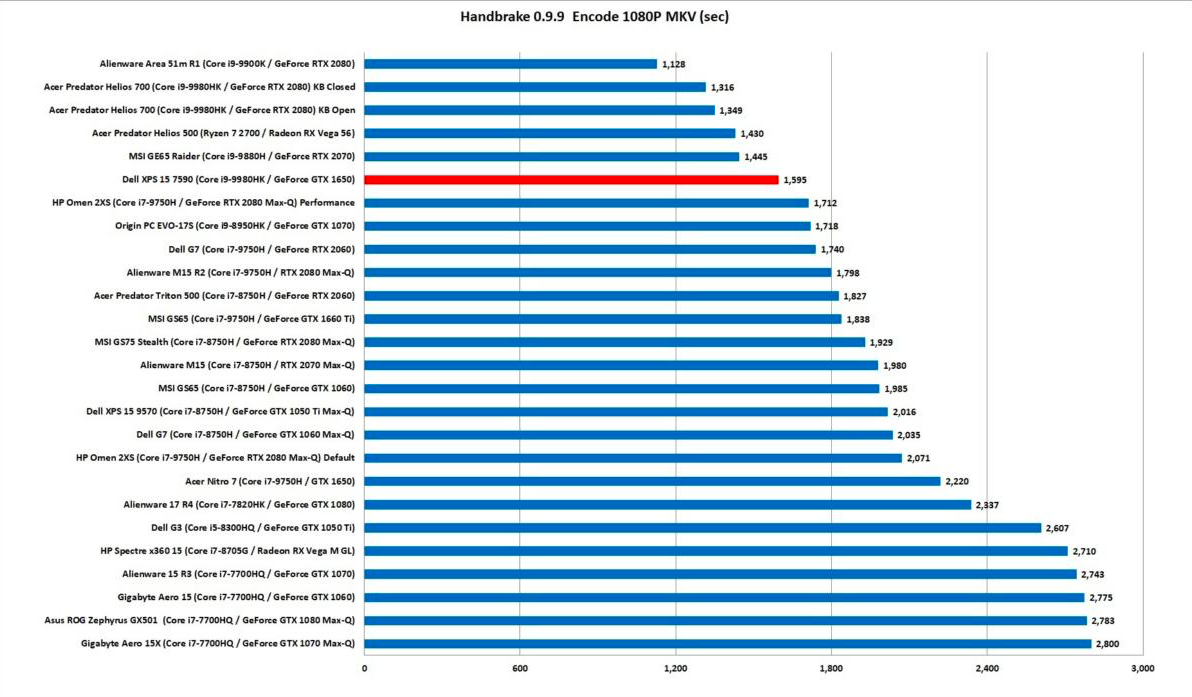 XPS 15 is not a gaming laptop officially but anyone looking at its parts may assume it to be. The HandBrake tests provide you a good analysis of the gaming performance of the Dell XPS 15 7590.

By running UL’s 3DMark FireStrike to measure just the graphics performance of the laptop in DirectX 11. The result shows that the XPS 15 slides in just under an Acer Nitro 7 budget gaming laptop with the same GeForce GTX 1650. 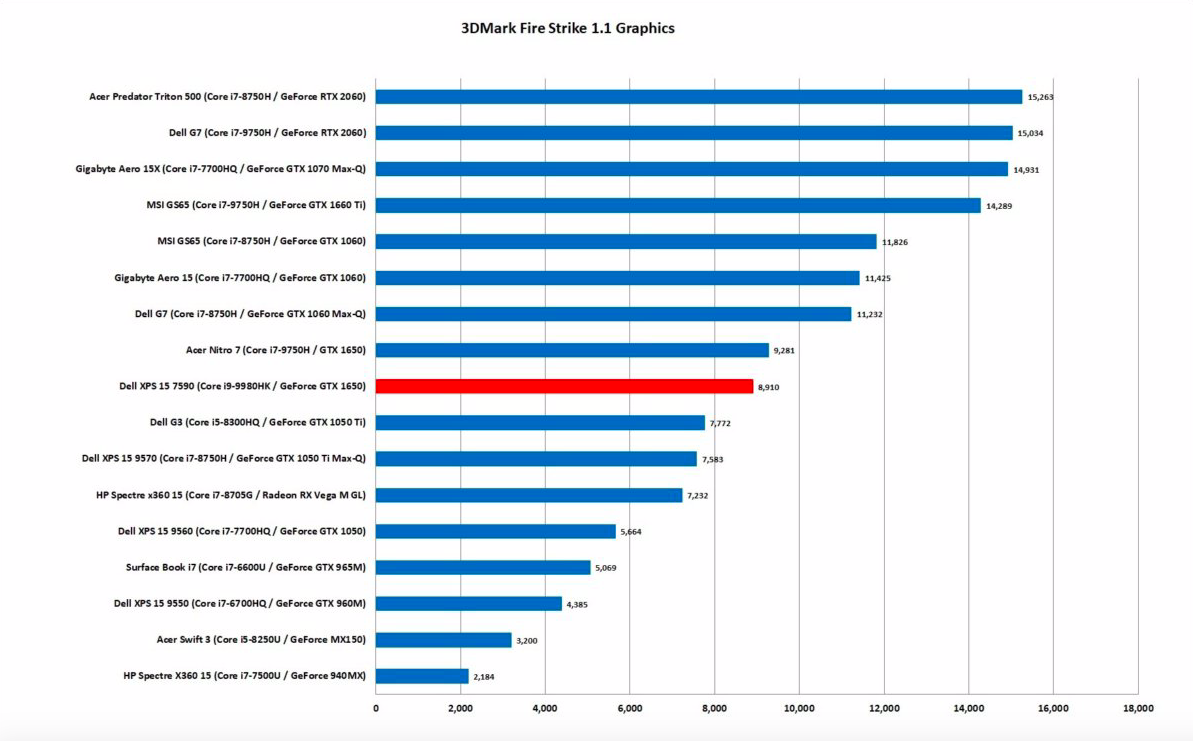 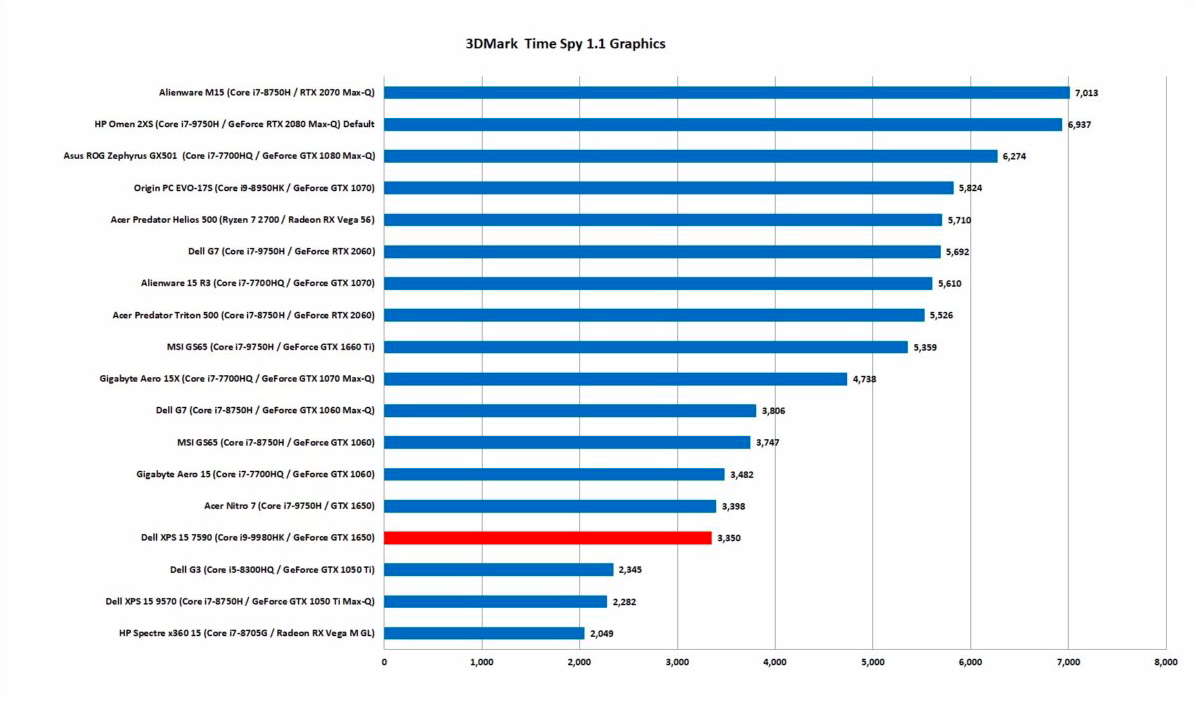 In Rise of the Tomb Raider, there are limits of the XPS 15’s smaller body. The spacious chassis of Acer’s Nitro 7 and some other gaming laptops help them to keep comfortably ahead of the XPS 15. 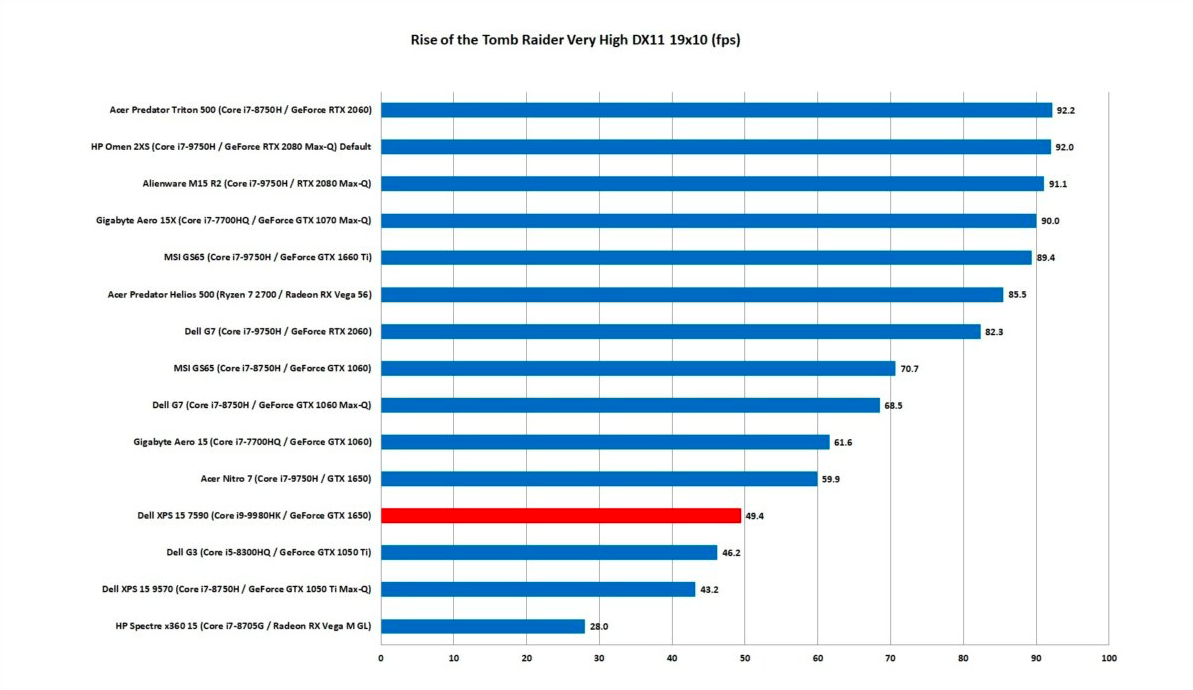 The most important metric to many is battery life. If you loop a 4K video with the laptop in airplane mode, with the screen brightness set to reasonably bright e-g 250 to 260 nits. Also, attach a pair of earbuds with the audio turned on about halfway.

You can’t really expect much from the XPS 15 7590, because of its 4K screen. As higher-resolution screens generally lop a third off of battery life. Also with its 32GB of RAM and the rest of its hardware you couldn’t think the XPS 15 would compete at all. But in contrast to this, the Battery Life on the XPS 15 is exceptional considering its 4K screen. 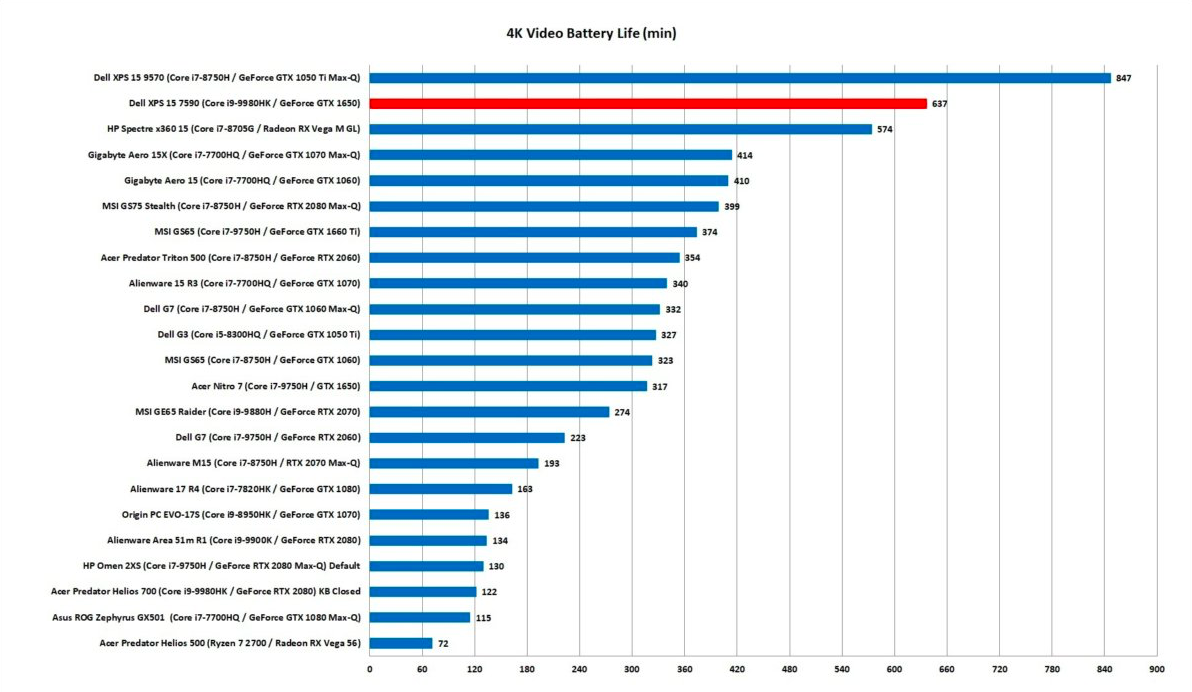 Instead, you will be pleasantly surprised to see more than 10 hours of run time from the XPS 15 7590. That’s really exceptional for a 4K-equipped laptop. The OLED panel helps a lot because OLEDs don’t use power for backlighting on black scenes. Also, the XPS 15 7590 has a giant 96-watt-hour battery.

The top laptop for battery life is the Dell XPS 15 9570 with a standard 1080p screen, which has 14 hours of run time. If you want maximum runtime, opt for a lower-res panel.

Video rundown tests are easy for modern laptops. Web browsing cuts life by a third or more. To edit video, it cuts it in half at least. If you intend to play games, don’t ever expect more than an hour to two of battery life on any laptop.

You can also see the additional heat spreaders Dell has added to the XPS 15 7590’s voltage regulators to help reduce overheating. Unfortunately, that’s still asking a lot of the XPS 15 to push an 8-core CPU and 75-watt GPU.

You can see a little bit of the XPS 15 7590’s thermal limitations above in the HandBrake test, where the XPS 15 loses to the thicker and heavier MSI GE65 Raider despite the Raider’s slower CPU.

By running 4 -runs of the HandBreak test back-to-back you can get a deep analysis of the XPS 15 7590’s thermal throttling.

In the first run, The XPS 15 roars off at 4.4GHz on all cores. But once the laptop heats up, it begins to slow down. The clock speeds fall from sky back to Earth, with most of the tests running in the 3.3GHz range. Eventually, the laptop runs at its 45-watt TDP rating but still stays above its base clock of 2.3GHz.

For the second and third runs, the CPU’s temperature is hotter for a longer period, but it still moves along. The fourth run has built up enough heat inside that most of the run is at 2.9GHz and a TDP rating of 45 watts. Much room is also not left for Turbo Boost on the last run.

This isn’t bad at all when you consider hammering of all the 8 cores of a 4.2-pound laptop for more than an hour with clock speeds at reasonably high levels.

Now, the question is, what would happen to the XPS 15 when the GPU and CPU are both producing heat?

Player Unknown Battlegrounds: The game isn’t known for its advanced graphics features, but it is for its CPU load, whether it’s to calculate game physics such as bullet drop or execute positional audio modeling, among other chores.

By running the game at 1080p with High settings, which is one notch down from Ultra and noting down CPU vitals it concludes that the clock speed kicks along in the neighborhood of 4GHz for the first 15 minutes of the game. At that point, the CPU falls into the much lower gear of 1.4GHz for most of the game, with the CPU now in a low-power state of 10 watts.

Having load on both the CPU and GPU simultaneously, performance dropoff on the Dell XPS 15 can be a serious issue. As the clock speed of the CPU falls off a cliff about 15 minutes into a game of PUBG.

One more important thing is a frame rate trace. Certainly, frame rates drop, but it’s not the impact of going from 2.6GHz to 1.6GHz. With the GeForce GTX 1650’s moderate horsepower, a drop from 70 fps to 55 fps doesn’t really change the experience much. Many games could hit this limitation.

Instead of the XPS 15, gaming enthusiasts may consider the Alienware M15 M2 With that disturbing graphic or the following laptops that we have already reviewed.

Grab The Best Deal From Amazon: