Flappy Bird, one of the all time most popular games is back with a twist. It is back with a mix of Battle Royal gaming style where the last flying bird will win the game. Flappy Royale is developed by Orta Therox and Em Lazer-Walker with Zach Gage. Its beta version for both Android and iOS devices can be downloaded from the official website here: https://flappyroyale.io 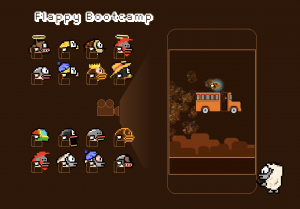 Gameplay of this new Flappy Royale is very simple. Just like the original game you have make your bird fly through Mario-esque pipes. Major difference in this game and the original Flappy Bird game is that its not the endless bird flapping and dodging. In fact, in this game you just need to survive for as long as all your opponents are eliminated. It brings a mixture of Flappy Bird and Battle Royale style, just like you might have experience in Pubg or Fortnite.

In Flappy Royale, you drop off from a Battle Royale bus along with the other birds at starting point. There you will start controlling your bird by make it fly by tapping on it. One bird surviving at the end of this game will be the winner.

Flappy Royale beta is available for both the dominating smart phone OS i.e Android and iOS. A Web Demo is also available on its official website. Full version of this game is planned to be released in July 2019.