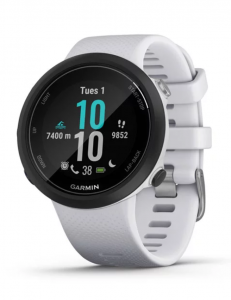 It is very much evident that the known brands like Apple, Fitbit and others are only focusing on all-in-one fitness watches. However, Garmin is still doing everything to produce a perfect portfolio in wearables category.

The Garmin Swim 2 can be identified as a swimming watch but it is not the only thing that functions in this product. We believe that it won’t be hard to choose The Garmin Swim 2 over the Forerunner 945 or the Vivoactive 4.

If you’re only looking for a watch that will cover your pool session then Forerunner was ideal for that spot. However, the Garmin Swim is made purely for professional swimmers.

If you’re a regular swimmer then The Garmin Swim 2 is definitely made for you as it brings some really amazing features along with some metrics that aren’t available on the other Garmin devices. It is also going to track your heart-rate underwater. 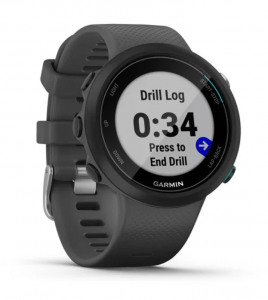 The starting price of Garmin Swim 2 is $249.99/£219.99 and we believe that is a little expensive for a device made specifically for swimming.

However, if you compare it with other devices in the upper echelons of Garmin like the Forerunner 945/935 or Fenix 6, the Garmin Swim 2 certainly looks a lot cheaper.

The Garmin Swim 2 was only released last year in October and we might not see any great changes in the price. However, you should always look for those special discounts that Garmin announces every now and then. 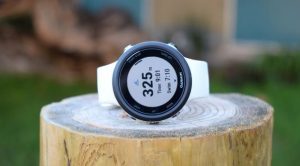 It certainly gives the look of a typical Garmin device but Swim 2 has been made in such a way that makes it perfect for swimming and pool sessions. It measures around 42mm across along with 5 buttons on its case with a 1.04-inch display.

Its thin design gives you two benefits. Firstly, it is a unisex design that is not the specialty of a Garmin watch. Secondly, it is very lightweight in design and weighs just around 36gms that makes it easy to navigate underwater. Forerunner is around 50g and it felt extremely heavier than the Garmin Swim 2. Another great feature is that there’s a MIP (memory in pixel) that reflects light on the screen to make it easy to read while you’re roaming around underwater. Its accuracy is guaranteed.

The displays in Apple watches are much richer with more data points but the Garmin watches are user-friendly and easy to understand and read via fogged goggles.

There’s no touch-screen feature in Garmin watches and everything happens with the help of the buttons around its case. 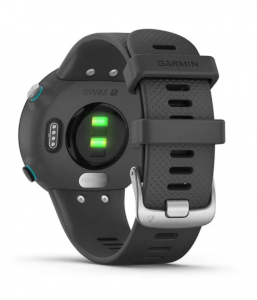 There’s no compromise in the design and build quality of this device. There are two loops around a silicone strap and the second one is added to keep the watch extra safe while you’re underwater enjoying your pool session. When the surface of the water is continually disrupted by the body, you need to make sure that everything stays in place. It does in the case of the Swim 2.

You should keep one thing in mind and that is the Garmin Swim 2 is purely made for swimmers. It also has cycling, running and cardio exercise modes as well but they don’t have many features on them. To put it in simple words, we won’t recommend this watch if you’re looking to avail any of the other services other than swimming features.

Also, The Garmin Swim 2 comes with two workout modes. One for Pool sessions and one for open water swimming. In pool sessions, the Garmin Swim 2 unlocks some extra features that you won’t get on other Garmin devices. Tracking your heart-rate is one of them.

There are other notable features as well such as tracking pace, SWOLF(Swimming Accuracy), stroke rate, training effects and more. We’re not saying that you should care a lot about all of these functions because they’re there to be digested in the Garmin Connect app. You can also switch them in and out of the watch’s data screens.

Here you will want to pick the pool depth on the watch, in yards or meters, before you even dip a foot into the shallow end. If you don’t give the correct size from the preset options list then you can enter a customized size. You can also customize your workouts using the Garmin Connect app or a web browser. It is also present in other Garmin watches. You can send the updates to the Garmin Swim 2 watch so that you can review and start them from the workouts menu.

But the watch comes preloaded with a crucial swim speed test – a calculation of your aerobic swimming threshold that is made of a 400m time trial followed by a 200m time trial after a short cool-down swim. The alert system is quite great as well.

This device creates alerts for time, distance and pace right from the wrist of the user. Set up a pace alert in a 25m pool, and once done with the target pace and time, the device automatically calculates how long each length should take and asks about the frequency of the notifications. These notifications are coming in the form of a bleep or a small vibration to tell you about your exact distance and your next move. You can also set the alarm when you hit the target at a certain time.

Another great feature is the Auto Rest option in this device. However, it is only available while you’re swimming in the pool and not in an open water lake.

The display will automatically turn black with white texts popping out on the screen as you go to rest. However, this might be a little slow feature because of the display getting darker even before the lap is complete.

Another potentially disturbing thing according is perhaps its inability to adjust perimeters. If you start resting for 15 seconds, the watch will go into a rest mode automatically. It is still a good feature but it needs a little bit of tweaking we believe.

But there’s no need to worry because you can still tap the lap button and start all over again. Also, you can enable the Countdown start function that gives you a three-second countdown before you start swimming again. But in terms of reliability, when in the pool, the overall distance monitoring is reported to be a little disappointing.

When you’re tracking without GPS and using movement alone, this is a really complicated one to nail, and even the Apple Watch Series 5 didn’t get it exactly right.

However, in longer distances, it will over-count the distance by adding an extra lap to your credit. The apps on offer are somewhat different in terms of open water swimming. While you’re not going to get workouts and pool-specific features like Auto Rest, you’re getting GPS tracking along with laps and time, distance and stroke rate warnings. 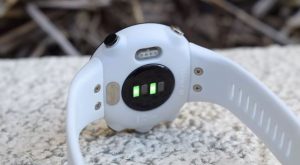 Heart rate is a very fascinating feature, as nobody else really does it from the wrist. Yes, it’s going to be potentially monitored by the Apple Watch, but sometimes we’ve found the results in the app to be spotty and we doubt that Apple would ever say that it’s completely accurate.

To get some accurate results about the Garmin Swim 2, a tested tried it against the Polar OH1 that is an optical sensor and was specially made for swimmers. You can also wear it on your arm or head for other activities like running.

Testing an optical against an optical isn’t the perfect test but it can be assumed the OH1 was very accurate in the past and specifically in the pool. It also produces less disturbing noise when it is clipped on the goggles. The Garmin Swim 2 heart rate is above, and the Polar OH1 below.

It definitely seems “enough” accurate although the Garmin did not measure the peaks as tightly as the Polar. A chest strap is probably a better option for the ones who really care about this material.

The great thing is that the Garmin Swim 2 can be paired with external heart rate sensors. But, they’re just paired to heart rate sensors and not anything else. It also gives you the option of using it something like Garmin’s HRM-Swim chest strap. As a matter of fact, it will automatically get paired to a sensor if it is detected anyway near it. It will happen when Polar OH1 is switched ON.

Other Smartwatch and Health features 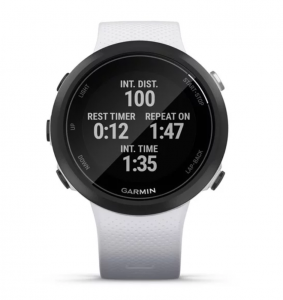 Swim 2 provides a few simple smartwatch functions that you will find on other Garmin watches but the overall deal is relatively modest. Mobile alerts can be taken as part of the notifications feature but there’s a loophole. You can’t just filter everything in your notifications so you would need to decide if you want all the notifications or want nothing. It’s pretty simple, take everything or don’t take anything.

There are apps like weather and calendar to be checked but you won’t find the onboard music and Garmin Pay. Weather and other apps like calendars can be removed or reordered as per your liking.

This watch can be used for running as well, and it is supported by the Garmin Swim 2. So if you’re looking to use it for running then you might have to give up on the music app. If only swimming is on your mind then it’s not a problem.

There is also sleep monitoring on display as with just about all other Garmin watches. However, we noticed that Fitbit’s are more reliable. The Garmin Swim 2 is not a bad watch at all and it does an OK kind of a job if you’re quick to get off your bed at your alarm bells. If you keep on staring at your phone for 10-15 minutes then this is a perfect watch for you.

This is a special watch made purely for swimmers and it can always give you some additional features to use when you’re not swimming. There are other Garmin watches as well with better smartwatch abilities. 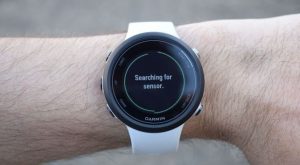 As far as the battery life is concerned then the Garmin Swim 2 gives you seven days of battery life in smartwatch mode. It also gives you up to 72 hours of battery in a pool mode and up to 13 hours of life if you have the GPS and optical heart rate sensor working together.

You can get up to almost a week of battery life if you’re doing swimming regularly which makes the battery life of this device a great asset.

The Swim 2 should be known only by those who see the pool or the open water as their main exercise. We can certainly see the appeal of the HR sensor for swimmers who dislike wearing a chest strap in the pool, while the wide range of swimming parameters will keep most swimmers satisfied.

We’re not persuaded, however, it has enough exclusive features to justify buying this over one of Garmin’s more developed sports watches, many of which also offer a comprehensive swimming feature package.