Chromebooks have risen in popularity to an extent in the past couple of years. They’re now being put on the same table as Windows laptops. This fuels great confusion among buyers that are looking to buy a new personal computer.

Chromebooks have given people a lot of necessary features for a laptop whereas, some customers still believe the traditional Windows laptops are the way to go.

There are many questions in the minds of people confused between buying a Chromebook or a Windows laptop. Some have also asked what Windows 11 means for laptops. Others are confused about the reliability of the Chromebook and its usability issues.

In order to help you make the correct choice, TechDetects has been working day and night to bring you the answers you’re looking for. Besides doing a lot of product reviews, we’ve also done comparison articles and today, we’re going to help you make a choice between Chromebook and a Windows laptop.

Who should buy a Windows laptop and why?

There are various advantages of having a notebook PC or a laptop powered by Microsoft Windows. While running a Windows laptop, you’d get the luxury of running any application of your choice. It also allows you to use the browser of your choice and organize antivirus options along with other utilities. Windows laptop users will also enjoy the flexibility of tweaking and configuring your PC as they choose.

Who should buy a Chromebook?

If you’re looking for a more optimized experience then Chromebooks powered by Google’s Chrome Operating System (OS) is the perfect choice for you. If you take it as a dedicated Chrome browser, you’d enjoy its company.

The difference in price is obviously extremely huge as compared to Windows laptops. Although, the processors used inside would be the same. There are a few American studies that have concluded that Chromebooks are best for in-person and distance learning. They have also stated that it’s a great idea to have a low-priced Chromebook for the home.

However, today’s Chromebooks are much more equipped than we think they are You’d get tons of Android apps along with cloud gaming and Google is also thinking about adding some more interesting and entertaining features to bring it on par with Windows devices. Chromebooks also dominate the list of Amazon’s best-selling laptops. You’d get a golden opportunity to claim a Chromebook at the lowest possible price on holidays or peak sales periods like Prime Day.

One of the flagship Chromebooks such as HP Chromebook x360 12b is OS-powered convertibles and there are Chrome OS-powered tablets like the Lenovo Chromebook Duet.

It seems as if 360-degree convertibility is now pretty popular among Chromebooks. People use it as an Android tablet to play their favorite mobile games on a bigger screen. The authorities sitting at the Google office have already indicated towards having Windows app on Chromebooks in the near future.

Reportedly, they’re looking to build a version of Parallels into Chrome OS. These Parallels can be used to provide remote access to Windows applications. However, it has been confirmed that you’d need a specific enterprise Chromebook in order to avail that service.

Difference between Chromebooks and Windows PCs:

A lot of our readers are already aware of the basic differences between Chromebooks and Windows laptops. If we could start over, let’s start with Windows PCs running Microsoft Windows 10, and soon Windows 11 as well.
Microsoft’s operating systems have been dominating the market for the past 25 years.

Windows applications are run on these machines from Microsoft titles to a rat of third-party software. These devices are available in laptop and desktop forms. These pieces can also be arranged in different ways to take care of productivity levels in order to resource crucial workstations. 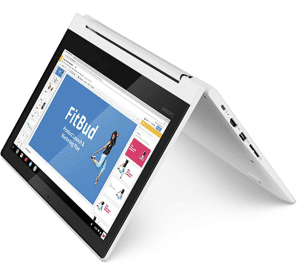 On the other hand, Chromebooks are very simple and are run on Chrome OS. It can also be categorized as a Chrome web browser vehicle. The price difference is approximately a few hundred dollars compared to a Windows laptop.

There is a new bonus coming up in the Chromebooks and reports are also suggesting that Android apps are coming to Windows 11, too. Another advantage of Chromebooks is that they have the ability to run Linux.
Although honestly, we don’t feel a lot of customers would care about running Linux on their machine. Chromebooks are no doubt inexpensive computers devices and they’re extremely bendable as well.

If we talk about the overall design of Chromebooks, you’d notice that it very much looks like a Windows-powered notebook, with a display, a keyboard and a front camera for video calling and other such activities. There are a couple of differences as well. Mainly, the keyboards of Chromebooks include a dedicated search keyboard key. On the other hand, Windows laptops give importance to the Windows key.

You are going to have many hardware choices as well with Windows laptops. It includes a clamshell notebook, converting the laptop into a tablet with the help of its 360-degree hinge. Using a 2-in-1 laptop has its own perks and you only get to enjoy them when you use them.

It is a known fact that most of the Chromebooks on the market are clamshells. However, we’ve been noticing quite a few convertibles getting the Android apps support. Chrome OS and Android are now conjoined and your choice now largely depends on how often you will use Android apps.

There is no problem in running Android apps in a laptop form factor, however; they’d definitely produce their best performance when used on a tablet. Another added advantage with most 360-degree convertibles is that they take the keyboard out of proportion and you’d get a huge tablet in your hand. Some people do prefer this approach.

The real differences between Chromebooks and Windows laptops are their specifications. Windows PCs come with a massive range of microprocessors powering their devices. Mostly, AMD Ryzen and Intel chips are used in Windows laptops. Recently, Qualcomm Snapdragon has also made an entry.

Chromebooks are often favorable towards using lower-performance Intel Atom Chips that are branded as Pentium or Celeron. Snapdragons and other lesser-known processors such as Rockchip or Mediatek are basically used and suited to the lighter demands of the Chrome OS.

AMD Ryzen chips are very popular and they have made this bold move to bring its powerful Ryzen chips into Chromebooks and Intel’s 11th-generation Tiger Lake Core chips will also be soon available in Chromebooks.

Of late, we’ve seen some premium-level Chromebooks including Intel Core CPU that also includes the Samsung Galaxy Chromebook. However, we strictly advise not you pay $1000 for a Chromebook. There is a lot of overlapping when we talk about Chromebooks and Windows PCs. You’d notice a similar HD (1366×768) or Full HD (1920×1080) display, however; Windows PCs are also looking for more storage and memory.

A memory of 4GB is enough to operate a Chromebook or a Windows laptop but we’re going to advise 8 GB when you’re using a Windows laptop. Also, Windows notebooks include more local storage for Windows OS and 128 GB or 256 GB is acceptable with no upper limit.

If you’re using a Chromebook, you wouldn’t need more than 16 GB because there is an advantage of using the Drive online storage. You can also stash Android apps on SD cards and less storage means less money paid. There is a choice of external storage in both Chromebooks and Windows laptops.

These were some of the points we wanted to make before you make the final call. Everything is right in front of you and if you’ve followed this guide thoroughly then picking between a Chromebook and a Windows tablet shouldn’t be a problem. Write it down in the comments below if you’ve any queries. We shall try and answer them precisely. See you soon in our next analytical guide. Until then, goodbye and good luck with whatever you choose.